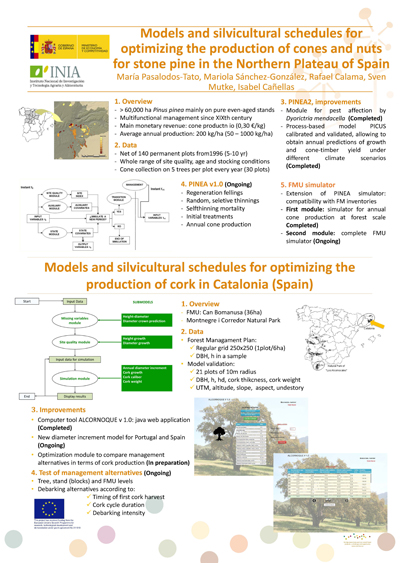 The province of Valladolid occupies the middle of the Douro river basin, a highland between 650 and 930m above sea level, and the centre of the Spanish Autonomous Region of Castilla y León in central Spain. It is a flat plateau, with its eastern limestone tablelands divided by river valleys.  In the north and west, mainly clayish farmlands have been cultivated (deforested) since pre-Roman cultures, and in the southern part are found sandy plains and dune systems known as “Land of the Pine Forests” that remain mostly woodland, due to their lack of cultivability. Only 18% of the province area is forest land (including heaths and grasslands), only 15% actual forests (124.414 ha), which are mostly pine forests (87,000 ha), especially Mediterranean stone pine (P. pinea, more than 50,000 ha) and maritime pine (P. pinaster). In the limestone plateaux and slopes, Holm and other oaks form coppices (25,000 ha) and woodlands mixed with the pines and several Junipers (5,000 ha), and finally there are 3,000 ha of poplar plantations on the river banks. 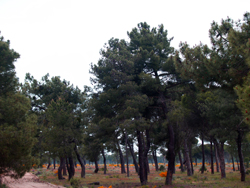 The province capital is the city of Valladolid, where 330,000 of the 520,000 inhabitants of the province live, the industrial and administrative capital of the Autonomous Region of Castilla y León. Agriculture in the province was formerly mostly rain-fed (cereals, legumes), though the irrigation area has increased in the last decades. The main use of forests, especially of the open, airy stone pine forests, is for recreational use by the urban population (including picnics, walking, biking, small game hunting, mushroom and wild asparagus picking). Some thirty kilometres around the town, numerous private forest estates have been transformed to housing areas decades ago. This trend reflects the importance of forest fire prevention in a complex urban-forest interface. The main income for the remaining forest owners is from stone pine cone harvesting, providing more than timber, biomass, grazing or the only recently recovered resin tapping. On the other hand, social conscience exists concerning the fragility of these forest ecosystems growing on the poorest, erosion prone soils of the region.