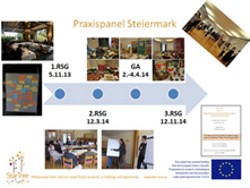 at the same time the 3rd official meeting of the stakeholder group in Styria, took place in the region "Zirbenland" and kicked off with a brief overview of the past – Harald Vacik summarized recent achievements of the RSG and introduced the plan of the day.

During the following "NWFP flashlight" participants could report on their latest experiences in the context of NWFP (i.e. since our last meeting in Grottenhof / Neuberg a.d. Mürz). Johannes Schantl wrapped up his impressions of the GA in Padua where he participated in accordance with a call for StarTree RSG members to join in for a networking session. Lisa Lehner and Magdalena Lackner reported on highlights with regard to their interview activities both for the Supply Chain survey and the In-Depth Case Studies. Participants brought in latest trends in the Austrian NWFP sector. RSG members provided insights to several ongoing projects, i.a. "NWFP medicine", "Forest delights", "XEIS Edelwild" (i.e. exclusive venison) and "Xeis Alpenlachs" (i.e. organic char), "Guided ski touring", "Swiss Stone Pine oil", or "Wild herbs production" pinpointing at an increasing interest in NWFP on a national level.

Marelli Asamer-Handler concluded with an update on Action Research with a particular focus on the evolution of "NWFP Nature Park Specialities". Participants additionally addressed various conflicts regarding the utilisation and property rights of certain NWFP (i.e. mushrooms, (Swiss Stone Pine) cones and decorative material) and thus triggered a discussion on issues such as i) access to forests, ii) picking of NWFPs as well as iii) legal provisions. Hence they perfectly set the stage for the following cornerstone of the 3rd RSG meeting, a presentation of selected results out of the "State of the European NWFP" – a synthesis report of the StarTree project that integrates the outputs of the first round of data acquistion across the 14 StarTree regions.

State of the NWFP sector in Europe

Based on recent project findings the talk provided insights both to the European dimension as well as to the regional level (i.e. Styria) and elaborated on the following topics: i) NWFP diversity, ii) NWFP marketing, iii) NWFP management, iv) access & use rights and v) innovations.

To proof the reliability and credibility of the outcomes, with a particular focus on the situation in Styria, RSG members were asked to comment on the results and to complement the analysis. The feedback was positive in general with no objections of the plausibility related to the "State of the Styrian NWFP". This serves as a proof of data correctness and depicts the level of validity for the Styrian case.

RSG members were (again) surprised by the broad definition of NWFPs, ranging from e.g. cultivated "wild" mushrooms to Christmas tree production on arable land. Their views expressed total agreement to absolute disagreement (aiminig at a more narrow scope that strictly addresses non-wood forest products, i.e. wild products originating from forest land). Besides that major concerns related to property, access and use rights and confirmed the discrepancy of the legal framework and the de facto situation in Austrian forests (e.g. forest owners in Austria have the right to restrict the collection of NWFP but cannot cope with the plenty of pickers hence they mostly tolerate NWFP picking in their forests). Forest owner representatives communicated that they would expect policy makers to facilitate and to secure compliance of legal provisions.

Another cornerstone of this meeting was to put emphasis on the three working groups (WG) that constituted during the 2nd RSG meeting, starting with a report by each coordinator: 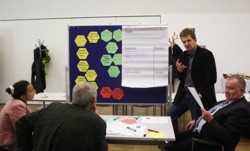 Each group then gathered at a round table to plan further collaboration according to three main questions: i) When would you consider your group as successful in 2017 (i.e. the last RSG meeting in the frame of StarTree)?, ii) What has happened in this respect? and iii) What must not happen?

Starting with a loose brainstorming according to the guidelines (see questions above) the group work targeted at a stringent outline of forthcoming activities (i.e. what are the aims and thus the activities that need to be accomplished), including a tentative schedule until the next RSG meeting.
The individual output for each group was presented in a plenary session by BOKU members who acted as facilitators and aimed both at displaying potential synergies amongst WGs as well as fostering the identification of a joint product out ouf the RSG work. 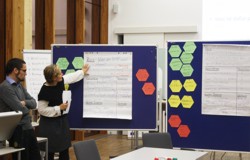 As a means of inspiration on how such a product could look like both "StarTree movies" were presented to the audience (i.e. Picking your moments: the science behind foraging in forests and Do you know: who owns mushrooms in a forest?). Although there was no common agreement on the final product, various opportunitites were discussed in detail. The production of a movie (or a series of short movies) that addresses selected NWFP topics in Styria could be feasible, as it could also be the case for a jointly organised NWFP symposium, a regional report on NWFPs in Styria or the production of NWFP dissemination material (e.g. brochures, guidelines).

April was forecasted for the next meeting which will be hosted by Mr. Andreas Holzinger in the "Gesäuse" region.

Additional emphasis was put on forthcoming international StarTree project meetings (General Assembly) and the opportunity for stakeholders to attend such events as a means of a networking plattform created by the StarTree project. The BOKU team will support interested stakeholders (e.g. reimburse travel costs).