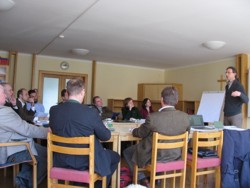 After a short summary of the main outcomes of the first RSG meeting a discussion on the key product groups that should be tackled in the project evolved. Due to the importance of honey or fish It was emphasized to broaden the RSG´s focus on the three selected products - Swiss stone pine, fruits/berries & game.

Services like recreation are not within the project´s focus but they are of importance in relation to NWFPs in general, hence these aspects are considered as well (e.g. holidays on the farm, direkt marketing, regional marketing, etc.). It was concluded to foster a more pragmatic way of thinking on what might be relevant (e.g. to forest holdings) than strongly relate to the scientific definitions since the group aims to collect an array of examples, also comprising game and fish for instance.

One of the crucial elements of this meeting was a detailed planning of the cooperation based on the outputs of the first meeting. Nine potential topics were suggested originally and were this time ranked in a group exercise. This prioritisation led to the following three focal topics (tradition and innovation where merged due to its equal importance): 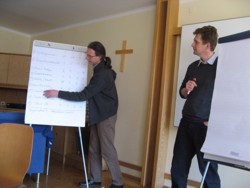 All other suggested issues could be tackled on demand at a later stage. On the above mentioned focal topics first steps could be accomplished to immediately start with the work: i) tasks were defined, ii) partners assigned themselves to the working groups and iii) a coordinator was nominated for each group. Additionally one representative from BOKU was announced who will be the key contact person in the future.

Synthesis of the collaboration

Apart from the outcomes of the focal groups and the work within StarTree first ideas for a common “final product” were formulated by BOKU ranging from a handbook, over a web-platform, to a seminar or a training course for different interest groups for instance, merging the efforts and achievements of the entire team in a concluding summary of all the work that has been conducted. 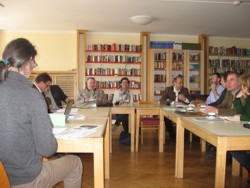 Although positively perceived by all participants it was mentioned that we must not forget about the limited amount of time of most representatives. A first compromise after a short weighting of options led to the decision to document all activities concisely and disseminate them on the regional page of the Styrian Case Study Region on the offical StarTree website. However, it will be an important task to achieve a broad level of dissemination of the results amongst forest owners. Both aspects will be further discussed in the future and strongly relate to the results of the working groups as well as on the overall project developments.

The RSG members were introduced to the stakeholder interaction at the forthcoming StarTree GA meeting in Neuberg, starting with two field trips in the morning (i.e. cooking from the meadow + organic Christmas tree production). In the afternoon a market place will be set up highlighting the following market stands with the support of most RSG members:

All partners received a handout with practical information on the organisation of the market place as every stand should provide relevant details in the format of a short oral presentation as well as a handout (~ 2 pages), discussing the following content:

November 2014 was forecasted for the next meeting, focussing on the following issues:

During the discussion on the next meeting location it was emphasized to take advantage of the opportunity to visit all regions that are represented in the RSG. The host of the next meeting will be Ms. Simone Doler, inviting the panel to the innovative LEADER region “Zirbenland”.